Earthstock began in 1992, at the request of a young student from Madison High School, Joseph Janson.  Joseph was born with Dueschennes Muscular Dystrophy, and was confined to a wheelchair. Joseph loved music and he loved to dance, but he was often disappointed that he couldn’t attend the high school dances because of support or transportation issues.

While working with Tony Nitz, a new educational assistant, Joseph suggested that they have their own dance. From that, Earthstock was born.

The first dance was held in a high school gym 100 times to big for the 60 kids in attendance. Tony used his home stereo and a collection of cd’s to celebrate Earth Day with a daytime dance.

For weeks the students talked about the fun they’d had, and plans began for Earthstock II.  Each year a few more schools came, and the party grew. In 1998, Earthstock found its new home at “McMennamin’s Crystal Ballroom” in southwest Portland. With its ballbearing floor and classic Portland history, Earthstock had hit the big time.

By 2001, Earthstock had grown from a group 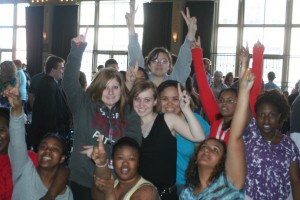 of 60 kids in a gym, to 400 kids in one of Portland’s hottest night spots. The Crystal opened in 1914 and has hosted bands such as the Grateful Dead, Tina Turner, Nirvana (and many others) and continues to attract popular acts such as Liz Phair and the Indigo Girls. For Earthstock to take its place on their wall of fame is a true honor.

In 2008, Earthstock took another huge leap, with students coming from Vancouver, Wash., Battleground, Wash., and Oregon cities Hillsboro, Salem, and Sandy … and all parts in between. Earthstock now entertains more than 700 students, staff and volunteers, and is rapidly becoming one the largest events of its kind in the country.